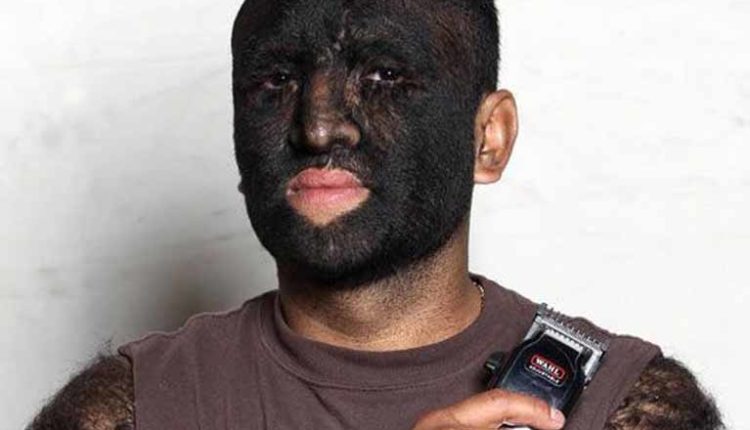 Larry Gomez was born with a genetic disorder named congenital generalized hypertrichosis, which completely covered his body with hair.

People used to make fun of him because of his unusual appearance. After years of ridicule and bullying, now he proudly boasts the accolade of being the ‘world’s hairiest man.

Larry Gomez, of San Bernardino, California, got the nickname ‘the Wolf Man’ because of his thick and dark hair, covering 98 percent of his body – including his face.

This genetic disorder is very rare and strikes less than 100 people worldwide. Larry and a number of his family members suffer from this disorder. Cruel children bullied him a lot during his time at school, but Mr. Gomez – whose real name is Victor – never said a single word to them.

After getting a place for himself in Hollywood, he has finally learned to accept himself the way he is. In 2011, he was searching for an apartment, and there he met Alicia Martinez. His newfound confidence helped him to propose to her and they both tied the knots in 2012.

He said that he is going to spread the message among people to be confident in their skin. Everyone has a unique appearance, but we shouldn’t judge anyone based on their skin color or features.

Travis Hoefle, a filmmaker, covered a long distance to meet with the iconic ‘Wolf Man’. Travis has a YouTube channel ‘Wizard of Odd TV’ with 24,000 subscribers. He said: ‘Five members of his family suffer from this disorder. Larry and other men have thick hair while the women of the family have a light to medium coat of hair – covering most of their bodies.

Mr. Gomez trims his hair once a month, but his hair grows back very quickly.

‘It was a wonderful experience to meet him. He is a very caring, loving, and nice man. Larry Gomez loves to make jokes and spread happiness. I recorded his interview to upload it on my YouTube channel ‘Wizard of Odd TV. The purpose of making this channel was to upload the amazing stories of ordinary people and to provide them with positive messages about life.’

Travis Hoefle added: ‘His outlook on life is very simple and inspirational – Life is not a bed of roses, so you have to make the best of it. He is a real family man.’

In February 2000, Mr. Gomez and three others in his family were awarded The Guinness World Record for having the largest hair. Mr. Gomez and his brother Gabriel were part of the Mexican National Circus, but then Gomez got more and more achievements.

After working in the film ‘The Wolf man’ in 1941, he chose the name Larry for himself. According to IMDb, he chose this name because of the main character Lawrence in the film. In 2011, he worked in another hit movie Water for Elephants with his co-stars Reese Witherspoon and Robert Pattinson.

He had a son, Michael, with his ex-wife, who he split with in 2007. His son doesn’t suffer from the genetic disorder hypertrichosis. If a person’s body starts making abnormal levels of male hormones, then the chances of this genetic disorder exceed up to 95 percent. The medical fieldsfield do not find yet a satisfactory treatment for this disease.