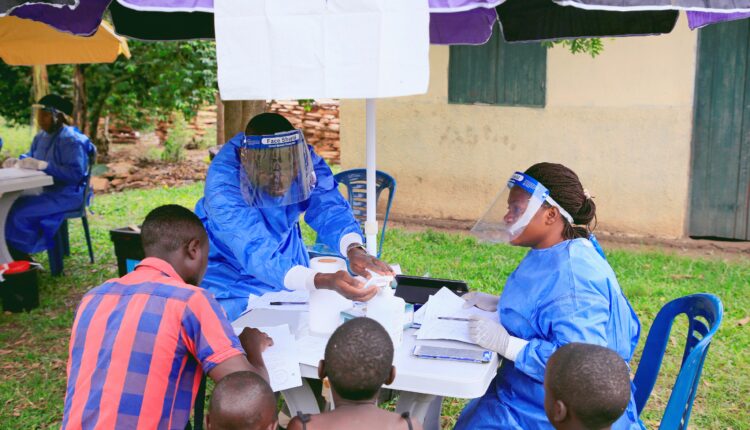 In Mubende, central Uganda, it appears to be a typical day. Children are in school, businesses are open, and individuals are free to gather in public as long as they maintain their social distance.

The only signs that something is amiss in the heavily crowded mining sector, which is fighting to control an Ebola outbreak, are the ambulances that whiz by every few hours and the medical personnel who scrupulously wash themselves before they go home.

The World Health Organization (WHO) announced on Wednesday that 29 people, including four healthcare workers, have passed since since the epidemic was notified in the district on September 20.

Mohammed Ali, a 37-year-old Tanzanian physician who worked at the Mubende hospital and had performed surgery on a patient who later tested positive for the virus, was one of them. A total of 63 cases have been documented across five sub-counties, with six more health personnel also sick.

Kesande Pamela, who owns a store in the centre of Mubende, stated, “We are afraid, but there is nothing we can do. “I need to make money and keep my store operating. We are working to be safe and have information.

President Yoweri Museveni assured Ugandans on Wednesday that the virus was under control. “The administration is capable of managing this outbreak like we have in the past. As a result, there is no justification for fear, panic, movement restrictions, or the unwarranted closing of public spaces, he stated in a televised address.

However, the situation is “extremely critical,” according to Dr. Christopher Mambula, the programme manager for Médecins Sans Frontières (MSF) in Uganda. He added that the lack of a vaccine for the Sudan virus, the strain of Ebola that is causing the outbreak, was a worry. Cases were increasing daily, and it was still unclear how widely the virus had spread.

The Sudan virus is resistant to the vaccines that were used to successfully contain recent Ebola outbreaks in the Democratic Republic of the Congo (DRC). According to the WHO, numerous vaccinations are being developed at various stages, and two of them could start clinical trials in Uganda in the upcoming weeks.

In terms of contacts and spread, if you have it in five [regions] or in more than one location, it begs the question of what is the chain of transmission between those various cases: was it one person who later infected others, or was there something akin to a super-spreader event, like a funeral, where not just one person but several became infected?, said Mambula.

He declared, “I would think this is very serious unless we got the indication differently. “The reality is that, particularly when you consider the incubation period, which is typically up to three weeks, it’s conceivable to go a week without seeing a case until 50 cases appear all of a sudden in a single day.

It’s still very early, but it appears to be rising rather than falling. There is currently no evidence that it is under control.

Health professionals have expressed concern that the illness might enter refugee camps. Mubende is located on a route leading to the DRC and is about three hours’ drive from Kampala, the capital. Many of the refugee communities along this road are home to at least 200,000 of Uganda’s 1.5 million refugees.

The WHO is deploying “more professionals, tools, and resources” to help Uganda’s Ministry of Health manage the virus, which is spread by contact with blood and bodily fluids, in addition to donating $2 million from its emergency fund. In addition to opening a second treatment facility in the adjoining Madudu sub-county, which is the outbreak’s epicentre, MSF has constructed a unit at the Mubende Hospital.

This week, Jane Ruth Aceng, the minister of health, requested further international assistance. If we want to put an end to this epidemic right away, we must step up our efforts, she said. I rely on everyone of you to do more, within your individual means, to help put an end to the Ebola pandemic in our nation.

Uganda will host a ministerial conference with neighbouring states and other African nations that have suffered Ebola outbreaks next week to discuss management strategies, according to the Africa Centres for Disease Control and Prevention, a division of the African Union.

Since 2012, Uganda has experienced just one epidemic of the Sudan type of Ebola. The Covid pandemic, which forced the closure of schools for over two years, has left the nation still struggling with its ramifications.