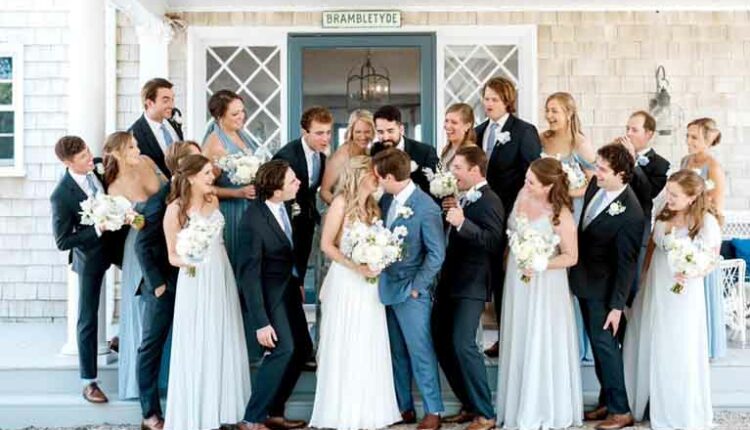 The grandson of the late Robert F. Kennedy ties the knots with Erin Daigle in Hyannis Port, Massachusetts. Mariah, Cara and Michaela Cuomo joined the rest of the family over the weekend to attend the wedding of Chris Kennedy.

His sisters, who are the daughters of New York Gov. Andrew Cuomo and his former wife Kerry Kennedy, were also there to enjoy his wedding ceremony. His sisters Mariah, 26, and Michaela, 23, uploaded their pictures on their respective Instagram accounts.

The couple ties the knots in the presence of their families in a small courthouse ceremony, presided by Chicago Mayor Lori Lightfoot. They actually married in December during the coronavirus pandemic.

Andrew Cuomo’s daughter Michaela uploaded a snap while sitting with her sister Mariah and a family friend Gail Evertz.

Christopher G. Kennedy and Sheila Sinclair have four children and Chris is one of them. There were plenty of guests in the ceremony from his father’s side of the family. The couple exchanged vows under a wood wedding arch in front of the water at the Kennedy compound. The wooden arch, adorned with flowers of white color, was providing an enchanting view to the guests.

The couple was looking radiant in the outdoor ceremony. The bride chose to wear an ethereal white gown featuring a lace V-neck bodice while leaving her blonde hair in loose curls. She adorned her hair with small flowers and a sheer veil and was looking very attractive.

The groom looked decent in a navy blue suit with a white boutonniere and white dress shirt. On his wedding day, he sported a tie of light blue color.

The outdoor view of the ceremony was catching the attention of the guests with its twinkly lights, rattan lanterns and a dance floor. The waiters were serving the guests with cocktails under a large white tent. An assortment of artfully arranged white and blue flowers, candles and white linens used to set the tables.

In the family picture, Mariah sat between her boyfriend Tellef Lundevall and her sister Michaela. Her twin sister Cara was at the end of the row. In another picture, she was laughing with her cousins Kathleen Shiver and Kyra Kennedy and the photographer captured their best moments.

Actor Keegan-Michael also attended the wedding ceremony of Chris with his wife Elle. The couple posed for a selfie with the wife of Robert Kennedy named as Cheryl Hines. 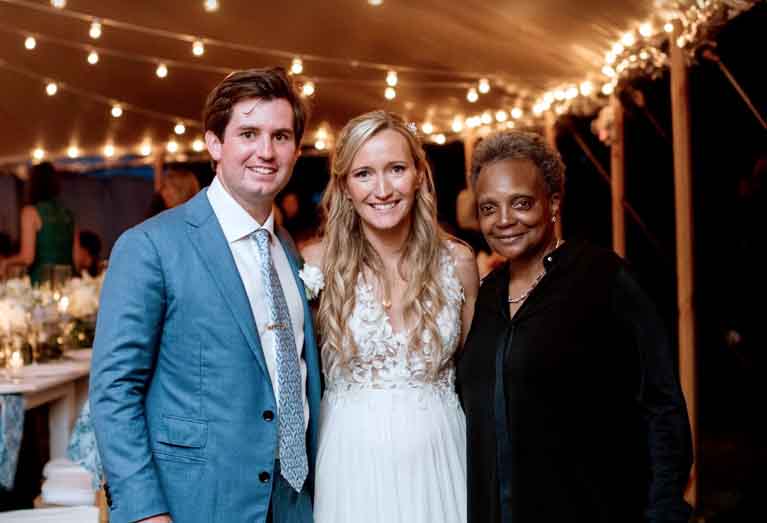 There were a number of circular tables with gold chairs under the tent for the guests. There was also a rectangular table near the center of the tent for the newlyweds and their wedding party. The DJ was playing the songs and the couples were dancing on the floor. Chris was also twirling and kissing his wife Erin on the beats of song ‘Dancing in the Moonlight. RFK’s daughter Kerry shared their dancing video on social media.

Mariah also shared a picture in which she was posing at the top of a red metal buoy in the ocean with her friends Adam Ellis Harper and Gail Evertz. Keegan- Michael came to the dance floor at the reception and showed his dance moves. He uploaded his dance video and wrote a caption: ‘Thank you sweet Gabriella for joining!’

Mariah chose to wear a shimmery purple wrap dress with a slit at the wedding while Kyra impressed everybody in a pale lilac strapless with ‘a funky lace’ netting at the bottom. Mariah also posted a heartwarming picture of his brother Chris and his wife Erin with Mayor Lightfoot standing between them and captioned: ‘Action-packed weekend celebrating Chris and Erin.’

Like her sister Mariah, Michaela also posted the pictures of the couple at the altar, as well as a selfie she took with two youngest guests at the wedding. She wrote a caption under these pictures: ‘Best wishes to both of you #chrisanderin2021.’ She uploaded a playful photo in a colorful floral dress with her arms slung around Cara and Carolina as Adam holds up her legs.

She also sent best wishes to Conor on his 27th birthday and shared photos of them together on Instagram. ‘Happy birthday, I love you my dear,’ she wrote under the images.

The blushing bride and groom posed for pictures with friends during cocktail hour. The friends of the groom donned navy suits and light blue ties, according to the color scheme.

Actor Keegan- Michael was also there at the wedding event of Chris and Erin with his wife Elle. The couple enjoyed a lot and posted their pictures on social media. Keegan also posted a video of himself dancing with a little girl under the tent.

There were hundreds of guests at the wedding ceremony and they all had a great time. The warm weather urged the people to take advantage of it and many events held outside the compound.

The friends of the college star posed for snapshots with his wife. Cheryl and her daughter Catherine Rose Young and Max Mirkin were also there in the photo.

Chris wedding was also a big family event for Ava. She was already in Hyannis Port with Conor, for the Kennedys’ annual celebration on July 4.  Conor and Ava have been dating for months and their first public outing was an LGBTQ fundraiser in June. The model Ava summarized the wedding weekend on her Instagram by posting photos and videos, including her photos with Conor. At the wedding ceremony, she chose to wear a two-piece floral dress, a cropped top and a high-waist skirt. . Conor was a groomsman, so he had on a navy suit with light blue tie according to theme.

In the pictures, she had a big smile on her face. She donned a pink eyelet dress which matched the flamingos on Conor’s funky shirt.

The friends of the groom made a human pyramid and Kyra was sitting besides that bunch of guys with her father. Gail also took many pictures on wedding weekend, including one with Cheryl.

The newlywed couple posted a picture holding up Mr. and Mrs. balloons on a boat on a Chicago River with a ‘Just Married’ background sign.

The family used to celebrate the fourth of July in Hyannis port, where they enjoy boat rides and the annual parade.